Authenticating Commercial Documents In The UK For International Use 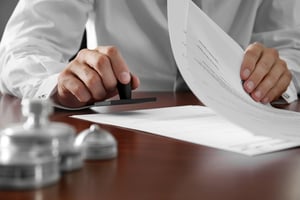 In our previous article, ‘Document Authentication and Legalisation: Step-By-Step Guide’, we took a close look at documents originating in the U.S. This included diving into the specific steps and requirements for publicly issued state or local documents, non-publicly filed documents and publicly issued federal agency documents.

In this article, we’ll dive into the verification process for documents originating in and outside of the UK. In addition, we’ll explain some of the complexities involved with British overseas territories, Crown dependencies, GCC (Gulf Cooperation Council) countries as well as how to handle document authentication with Hague Apostille Convention members and non-members. Read on for more.

Documents Originating in the UK: The Hague Apostille Convention

The Hague Convention Abolishing the Requirement of Legalisation for Foreign Public Documents — also known as the Apostille Convention or Apostille Treaty — is an agreement between member-countries allowing the recognition of apostilles without the need for further involvement or authentication from relevant embassies.

Unless granted by a government authority (i.e. Companies House), any commercial document issued in the UK needs to first be notarised. This is to verify the signatory of the document.

Once this is complete, the certified or notarised document is sent to the Foreign, Commonwealth and Development Office (FCDO) in London to be validated — this is the authority in the UK which issues apostilles for documents. Once the apostille is complete, the commercial document can be used in its destination country, as long as it’s also a Hague Apostille Convention member.

What happens when the destination country isn't part of the Hague Apostille Convention?

If a document originates in the UK and needs to be used in a country outside of the Hague Apostille Convention, such as Mainland China, once the apostille is issued by the FCDO, it must then also be taken to the Chinese embassy for further authentication before it can be used in Mainland China.

This process could be lengthy and the embassy might request supporting documentation to issue their authentication. This includes more details about the applicant, the purpose for which the documents are being submitted, the ID of the person requesting authentication, and more. The type of additional documentation requested will also vary at different embassies, along with the timescales to process these requests.

Foreign Documents Used in the UK

Is the authentication process different for foreign documents needing to be used in the UK? The answer here is no, the process is the same (as mentioned above).

If the country of origin is a Hague Apostille Convention member, like the U.S., all you need to do is get apostilles from the department of state and it can come directly to the UK and be used for commercial purposes — without the British High Commission verifying the documents.

For countries outside of the Hague Apostille Convention, once the apostille is obtained, it will need to be further authenticated by the British High Commission in that country before it can be used in the UK.

For instance, Canada isn’t a member of the Hague Apostille Convention. If the document originates in Canada, then it would have to go to Global Affairs Canada and then the British embassy for authentication before being brought over to the UK for use.

Verifying for Seated Embassies in the Country of Origin

As you go through the process of authenticating documents, you must consider whether the embassy of the destination country is seated in the country of origin. While the UK is home to a significant number of embassies from around the world, if your documents originate in a smaller country, such as the Republic of Ireland, it may not contain the embassy you require for verification and authentication. In this case, you must identify which neighbouring countries have jurisdiction over the country of origin.

For example, what happens when a document originates in Denmark and needs to be used in Qatar? In this case, the nearest country with a Qatar embassy having jurisdiction over the Danish documents would be the Netherlands. The document would then have to be brought to the Netherlands for further authentication by the Dutch Ministry of Foreign Affairs before it can be taken to the Embassy of Qatar in The Hague, Netherlands.

The UK also holds authority over Crown dependencies such as Jersey, Guernsey and the Isle of Man. Any document needing authentication arising from these Crown dependencies can be brought over to the UK directly (no local apostille needed) and be apostilled by the FCDO.

For documents originating in the UK and destined for Arab countries bordering the Gulf, with the exception of Kuwait, Qatar and the United Arab Emirates, there are additional steps for having them certified and legalised at the London Chamber of Commerce and Industry (LCCI) as well as the Arab-British Chamber of Commerce (ABCC).

The LCCI and the ABCC will only certify or legalise a document if they show the destination country, either within the body of the text or handwritten on the reverse of the document in pen, stating ‘For use in <insert country of destination>’.

In addition, when it comes to GCC-bound documents, the embassy of the destination country may require a translation of the document submitted for authentication. For instance, the Libyan embassy requires that all processed documents are translated into Arabic.

Furthermore, since Kuwait, Qatar and the United Arab Emirates aren’t members of the Hague Apostille Convention, documents destined for these countries will first need to be certified and legalised by the LCCI and ABCC, followed by the validation and apostille issued by the FCDO. Finally, the documents will need to be brought to the relevant embassy for further authentication.

It’s clear there are a number of complexities involved when it comes to producing corporate documents issued in one country for use in another. If you’re curious to know more about the process for legalising documents around the world and the history of the Hague Apostille Convention, click the button below to download a recording of a webinar we recently ran on  understanding what’s involved in legalising and authenticating documents that originate in different countries. 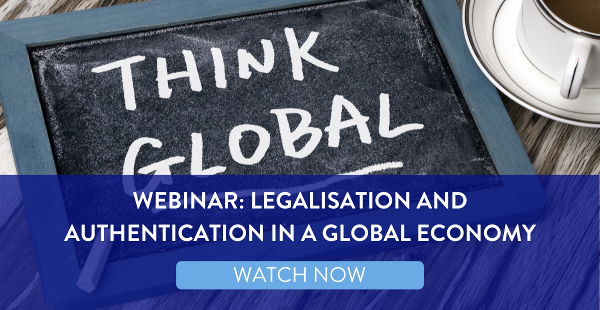