What this is - The differences among state laws and rules concerning your entity name can have a big impact on what the company is called in a given state.

What this means - If you’re preparing to qualify your business in a large number of states, using the same name in each may be a problem. Read on to find out why from our very own Teri Mayor.

When a registered entity, such as a corporation or LLC, plans on doing business in a large number of states (or even just a few), the differences among state laws and rules concerning the entity name can have a big impact on what the company is called in a given state. It can be difficult, especially if the company is registering to do business (“qualifying”) in a large number of states, for the company to use the same name it uses in its home state in every registration. Below are the answers to some common questions regarding company names that arise when a company is planning on registering across the US. 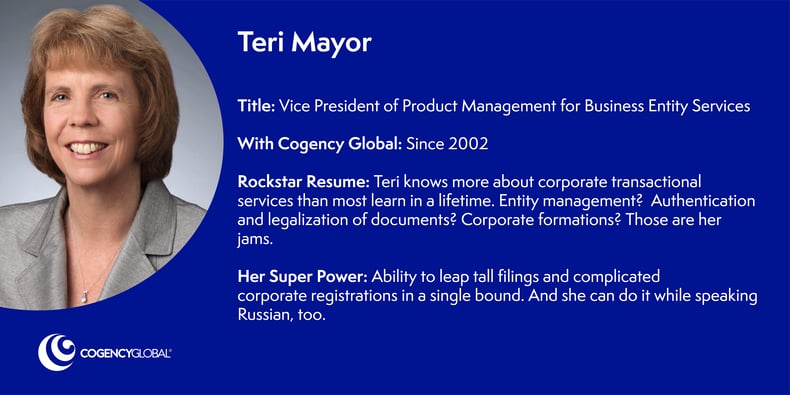 Q:  Does the corporate name have to be available in all states?

A:  Not necessarily.  In fact, it can be pretty difficult to register under the true company name in all states for a number of reasons, one of which is the name may already be in use in a particular state. Because states use different criteria for determining whether a name can be considered distinguishable from previously existing companies, it can be difficult to find a name that works in every state. For example, in New York state, if the name is different only because one of the key words is just a different part of speech (for example brokerage rather than brokers), the name will not be considered distinguishable.

Q:  What do I do if the name of my company is not available for use in a given state?

A:  The qualification process in every state, except Kansas, allows for the use of a “fictitious,” “alternate” or “assumed name.”   The procedures for registering a fictitious name vary from state to state. In most states, the true name of the entity is listed on the qualification form, followed by a statement that in this particular state, the company will use a different name, which is also listed on the form. The fictitious name chosen needs to be available for use and must comply with other state naming requirements.

In some states, including Arkansas, North Carolina and New Jersey, the qualification document spelling out the alternate name should be accompanied by a resolution of the governing body of the entity, such as the board of directors, authorizing the use of the name.  (In other states, this requirement exists for corporations but not for LLCs. In some other states, an additional filing is required for the company to use the chosen name. For example in Illinois, the corporation must also file an “Application to Adopt an Assumed Name.” Often, when an additional assumed name or trade name filing is required, it must also be periodically renewed.

Q: Should I reserve the company’s name in all states where I intend to qualify?

A: The answer depends on how quickly you plan to proceed with the qualification filings. If the company is able to file all the qualification documents quickly, reserving the name in so many jurisdictions may not be worth the trouble. If, however, the process is expected to take a long time, and if it’s important that the company use its true entity name in as many states as possible, the company may decide that the expense of first reserving the name, as well as the time that will be required to track the different expiration dates and file reservation renewal forms needed for ongoing protection, is worthwhile.

Keep in mind that a name reservation does not fully protect the name. Whether the company reserves the name or goes straight to registration, filing an entity name with a given state’s corporate registry only prevents other registered entities from filing with that name there. It does not protect the name against non-registered businesses, like general partnerships or trade names. Copyrighting the name will protect the name you wish to use much more broadly than reserving it with the Secretary of State. However, a copyright will not prevent another entity from registering with the name, it simply allows legal recourse if the entity is engaged in a similar business.

Q:  The company name appears to be available or is reserved in all 50 states. Is that a guarantee the company can use that name?

A:  No, unfortunately, it is not. Depending on the type of entity and what words are included in the name, consents and approvals from other agencies may be required. These other agencies often have their own rules regarding the company name. Insurance agencies and brokerages come across this when registering in NY, CA or MA, for example. In these states, if the company is going to get licensed as an insurance producer, it has to obtain consent for the entity name. The name must clearly spell out the type of business it is, which generally means the company must use “insurance agency” or “insurance brokerage” as a part of the name. For regulated industries, a company should verify any name requirements with the licensing authority prior to registering with the Secretary of State. In some cases, although there is not preliminary approval required to qualify the entity, its name still must meet certain criteria. If the company has already registered a name with the Secretary of State that does not meet these requirements, it may need to adopt a forced fictitious or elective assumed name to comply with the licensing authority’s rules.

Also, the name may be trademarked or copyrighted, which means use of the name could result in legal action taken against the company, even though it is available for use in a given state. These types of filings do not show up on a search of the Secretary of State’s records.

Q:  Does the indicator the company uses to reflect its entity type matter?

“Inc.,” “Incorporated,” “Corp.” and “Corporation” are acceptable in every state to designate corporations, as are L.L.C and Limited Liability Company for that entity type. “Limited” is somewhat less universal. The following states do not recognize “Limited” or “Ltd.” as an indicator for a corporation:  Alabama, Arkansas, Florida, Ohio, Tennessee and Utah.

The variations found in state business entity statutes regarding what makes a name available, the types of indicators which can be used and the ability for other state agencies to determine a name’s acceptability mean it is likely a company will need to use a fictitious or alternate name in some states if it is registering to do business across the country. To plan ahead for this likelihood, a company may want to decide on one or two alternate names that it plans to use if the true name of the company is not available or not allowed for another reason.

Can two businesses have the same name in different states?
Because businesses are registered at the state level, it’s possible that a business in one states can have the exact name as one in another. However, similar names could lead to trademark and liability issues if the business being engaged in is similar. A professional trademark search to check for possible conflicts can be a wise choice.

How do I form a business in multiple states?
If you are planning to do business in multiple states, the best option is to first consult with an attorney. Choosing which type of entity to form, and whether it makes sense for form in the state where the principal office is located or another jurisdiction, such as Delaware are serious questions that can have a big impact on your business in the future. An attorney is best suited to understand your needs and where you need to both form and qualify the entity to do business. Read more at Changing Company Type or Moving to a New State.

Why is Delaware the best state to form an LLC?
The Delaware judiciary, lawyers and state legislature work closely together to keep Delaware at the forefront for business. You can read about the evolution of Delaware as a corporate-centric state in this article Why do Companies Incorporate in Delaware?