A Notary by Any Other Name May Not Be the Same! 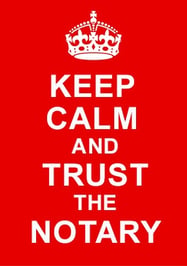 The U.S. and Mexico have a great deal in common besides a border. Both countries have a capitalist economic system, a culture largely based on a Judeo-Christian religious tradition and a democratically elected federal government composed of three branches and governed by a constitution. Yet there are differences, one of which is the role played by the notario publico.

While “notario publico” literally translates to “notary public,” this is a bit misleading. The responsibilities of a Mexican notario publico and a U.S. notary public are very different. The main reason for this difference is due to the type of law practiced – Mexico is a civil law jurisdiction while the U.S. is primarily a common law jurisdiction. Common law originated in the U.K. and is found throughout the world anywhere the U.K. colonized or had a major influence. Civil law is based on Roman Civil Law and is found throughout much of mainland Europe and areas where European countries had a primary influence, including South America and Mexico. Under civil law, a notary plays a much larger role than is found in the U.S. and other common-law jurisdictions. This article will compare the roles and responsibilities of notaries in the U.S., Mexico and Europe (using France as an example of European requirements).

In short, there are major differences between a notary in the U.S., where the role is limited to certifying the validity of a signature, and in civil law countries like Mexico and France, where a notary is a professional legal position demanding specific education and training and whose role is to certify the legal validity of a document. When working outside the U.S., it is an important distinction to understand.