An Unintended Space Can Render a Financing Statement Seriously Misleading – At Least in Wisconsin! 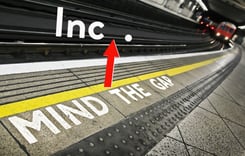 What’s the difference between “ISC, Inc .” and “ISC, Inc.”? Did you notice the single space between the second “c” and the period in the first variation? Would you have caught that discrepancy if you’d been reviewing a financing statement for accuracy? Not noticing a space that doesn’t belong can happen to the most careful of UCC filers. That barely noticeable single space seems like almost nothing. Yet in a recent case from Wisconsin,  it caused a financing statement to become insufficient.

The Case of Double Bubble, LTD

In 2012, Double Bubble, LTD (secured party) filed an initial UCC1 financing statement with the Wisconsin Department of Financial Institutions, the central filing office in Wisconsin. The debtor’s name was styled as “ISC, Inc .”  The extra space before the period caused the UCC1 to be deemed seriously misleading and ineffective to perfect the security interest.

Article 9 of the UCC places the burden of the UCC filing squarely on the shoulders of the filer, which is most often the secured party. It’s their responsibility to indicate the debtor name correctly. Generally, the “correct name” is the name as it appears in the public organic record reflecting any amendments in the state of formation.

A secured party may occasionally have some latitude with the name as described in Section 9-506(a), which generally states that a financing statement may be effective even if the debtor name contains minor errors and omissions. One could argue the UCC filing made by Double Bubble LTD contained a minor error, the space between the last letter “c” and the period, and therefore should not be considered seriously misleading. Double Bubble LTD did attempt to argue that its UCC filing contained only a minor error and a “reasonable search” on “ISC” without the corporate ending would have disclosed the UCC in question.

So why did the court rule that the filing was seriously misleading and thus ineffective? The reason is that a third party searcher is only required to search on the true and correct legal name of the debtor in the state of formation using the filing office’s standard search logic. If a search meets this criteria and the filing is disclosed in the search results, then the filing is NOT seriously misleading and is an effective lien. In this situation, using the Wisconsin Department of Financial Institution’s website, and searching on the correct legal name, “ISC, Inc.” with the corporate indicator, the search did not disclose Double Bubble, LTD’s UCC filing. In Wisconsin, the following search logic methodology is applied for organization names by the state website:

Wisconsin search logic differs significantly from the search logic found in the Model Administrative Rules (MARS) that the vast majority of states have adopted. Under MARS, spaces and punctuation are removed during the search process. The two rules in MARS not incorporated into Wisconsin’s search methodology are as follows:

Had either or both of these rules been part of Wisconsin’s search logic, then Double Bubble LTD’s filing would not have been ruled seriously misleading. But, because the search logic in Wisconsin did not “save” the UCC filing by including it in a search result, the court had no alternative but to deem the UCC filing as seriously misleading. So if this fact pattern took place in a MARS state, it is extremely likely that the UCC filing would have been found and reported in a search result.

The drafters of the MARS crafted the model search logic in a way to minimize the possibility of unfair results in close cases. This case borders on an “unfair” result.

When you file, remember the following:

The easiest way to ensure this kind of search logic issue doesn’t make your UCC filing seriously misleading is to list the debtor name on the financing statement exactly as it appears in the public organic record (reflecting any amendments) in the formation state, including spaces and punctuation.

If you’re unsure about a filing, consider using an experienced service company. It’s an effective way to help you to avoid the kind of error illustrated in this case.