Delaware Franchise Tax: Why Do Some Companies Have to Pay Quarterly? 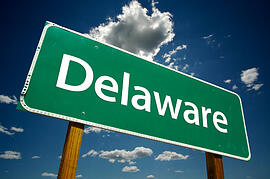 Most people who are responsible for ensuring franchise taxes are paid on time for Delaware entities know that franchise taxes are due for domestic corporations (along with the annual report) on March 1st and for limited liability companies and limited partnerships on June 1st.

So, there is often confusion when a company receives a quarterly tax notice from the state of Delaware along with confusion about how the tax payments are assessed and what the ramifications are for failure to make the payments on a timely basis.

Which Corporations Must Pay Quarterly?
Corporations owing $5,000 or more are expected to pay quarterly installments for the following tax year. That means that if your company paid $5,000 on March 1, 2012 for tax year 2011, the company will automatically become a quarterly tax payer. It’s all about owing $5,000 or more in taxes – that is the magic number to remember.

How Quarterly Amounts Are Determined
Note that the quarters are not broken down into equal payments. The first quarterly installment is due on June 1st. The amount due at that time is 40% of the taxes paid on March 1st. For example, a company that paid $5,000 on March 1st would pay $2,000 ($5,000 x 40%). On Sept 1st and Dec 1st, 20%, or $1,000, would be due on these dates. After the December 1st payment, the company will have paid 80% of the amount owed the previous March 1st. The balance is due on March 1, 2013, OR, at this time, the company can calculate their taxes either using Delaware’s assumed par value capital or authorized shares method. After the calculation, should the total tax payment become less than $5,000, the company will no longer be a quarterly tax payer. (The calculated tax may be less because of a stock amendment filed during the tax year or a change in issued shares or gross assets.)

What Happens If You Don’t Pay the Quarterly Taxes on Time?
If you do not pay the quarterly taxes on time, then your company cannot obtain a Good Standing Certificate and interest will accrue on the unpaid tax balance. This can interfere with the company’s ability to close deals in a timely manner.

June 1st is just a few days away! If you are expecting to close a deal and need a Good Standing Certificate from Delaware on or immediately after June 1st, you may want to make sure that the company has paid their taxes to date and is not a quarterly tax payer!

• How to Calculate Delaware Franchise Tax