What is a Benefit Corporation? 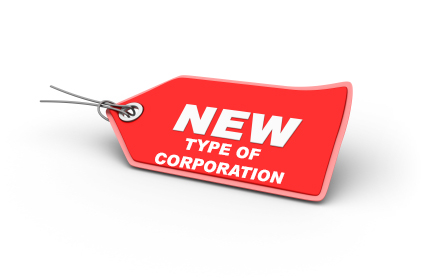 In the last few years, many states are introducing and passing legislation to allow a new type of corporation, the benefit corporation. Benefit corporations are designed to permit for-profit corporations to work toward the goal of creating a general and specific public benefits without risking claims by disgruntled shareholders that they are not fulfilling their fiduciary responsibilities by pursuing an objective that diminishes financial return.  In the model legislation, general public benefit is defined as a material positive impact on society and the environment assessed against a third party standard such as: providing low-income or underserved communities with beneficial products or services, promoting economic opportunity for individuals or communities beyond the creation of jobs in the normal course of business, preserving the environment, improving human health, promoting the arts, sciences or advancement of knowledge, or increasing the flow of capital to entities with a public benefit purpose.

States Where Benefit Corporation Legislation Has Been Introduced:

There are a few key components in the model legislation that are important to the formation and management of a benefit corporation. In most cases, the states have adopted these into their versions of the legislation, although variations exist among state statutes.

There are a number of reasons why a corporation might wish to be a benefit corporation. Benefit corporation legislation provides clarity and offers legal protection to officers and directors, confirming that their fiduciary duty includes the creation of a public benefit. It also helps to maintain the company’s mission over time by requiring a 2/3 majority vote of shareholders to remove benefit corporation standards and can help a corporation to differentiate itself in the marketplace as a company truly interested in the public good. As states continue to introduce and pass this legislation, more companies will be able to choose this option and more will be likely to do so for the reasons mentioned above.