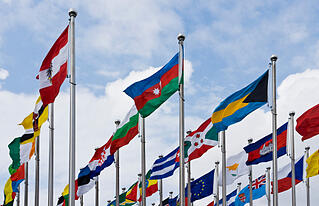 As mentioned in prior postings, parties to commercial financial transactions are often from different countries, with each country having uniquely different bodies of law and precedent governing commercial transactions. Such cross-border transactions may require the appointment of a process agent. The process agent (which also may be referred to as agent for service or contract agent) serves as a point of contact in the jurisdiction where the parties may not have a presence so that legal process arising out of the transaction’s operative agreements may be served. The jurisdiction is negotiated by the parties and can vary depending upon each party’s country of origin and the location of assets being pledged as collateral. New York and the United Kingdom are often common choices due to each jurisdiction’s recognized body of commercial law and established precedent in large financial transactions. The choice of either New York or English law can provide a degree of predictability, fairness, neutrality and justice for the resolution of any potential dispute.

In a cross-border transaction, the main transaction document (i.e., loan agreement) is usually governed either by New York or English law as these two governing laws are actually surprisingly similar and give parties the most flexibility and/or certainty. However, depending on where the parties of the transaction are incorporated and where their assets are located, the same transaction may also have several documents that are governed by other jurisdictions.

For example, in a loan transaction where the loan is granted in U.S. dollars and the lenders are located in the U.S., New York will usually be the choice of jurisdiction in the main loan document. However, if the loan is being made based on a security package which the borrowers are pledging to the lenders, typically the security documents are governed by the laws of the jurisdiction where the assets are located. Therefore, if the accounts being secured are in the U.K., then the account charge agreements in relation to those accounts generally are governed by English law.

Another interesting factor is that in some jurisdictions (particularly European jurisdictions, i.e., Austria), it is difficult to enforce judgments and/or resolve issues arising under documents governed by New York law in a foreign jurisdiction court and, therefore, Austrian counsel is likely to advise the use of English law as the governing law of a document under which an Austrian party has any obligations.

There are many factors that are considered in a cross-border transaction, including tax considerations. The location of assets, the ability to enforce the agreement and to seek remedies in the courts of the jurisdiction chosen are usually within the subset of  driving factors in selecting which law will govern the documents in a transaction. As always, these decisions are negotiated among the parties involved and the points discussed in this post are some examples of the matters that are considered when making the decision.

Once the jurisdictions for your transaction are known, it is helpful to work with a reputable process agent as a single point of contact who can streamline and expedite the appointment process for all of the required locations. (See “Top 5 Criteria for Selecting a Process Agent”.)