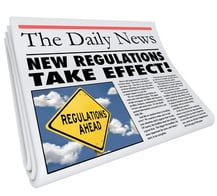 Annual Registration Renewal Fee Report (Form RRF-1), which is due 4.5 months after an organization’s fiscal year end, subject to applicable extensions available. However, recently amended regulations, effective January 1, 2016, regarding the enforcement of the California Supervision of Trustees and Fundraisers for Charitable Purposes Act (Government Code §§ 12580-12599.8), are making the accurate and timely filing of these reports more important than ever.

Severe Penalties for Filing Inaccurate Renewals or Not Filing on Time
The amended regulations that recently became effective provide harsh consequences to charities that don’t file their California charitable registration renewals on time or file them with inaccurate information. The new penalties include:

(a) Misuse of charitable assets.

(b) False or misleading statements and/or conduct in connection with a solicitation for charitable purposes.

(d) Failure to comply with the Standards of Conduct for nonprofit corporations in sections 5230 through 5239 and 7230 through 7238 of the Corporations Code.

(f) Failure to produce records in response to a subpoena or written request from the Attorney General.

These consequences make it more important than ever for California charities to make sure they are in full compliance with charity registration and renewal requirements.

For additional information and insights relating to the requirements and impact of these new regulations, please see the following: