What this is - On September 30, 2022, the U.S. Department of Treasury’s Financial Crimes Enforcement Network (“FinCEN”) issued its long-anticipated final rules (“Final Rules”) for the beneficial ownership reporting requirements of the Corporate Transparency Act (“CTA”), and announced a January 1, 2024, effective date.

What this means - The effective date will trigger the filing due dates for beneficial ownership reports. Below are some of the key elements of the CTA and the Final Rules.

The CTA requires all “reporting companies” to disclose to FinCEN the full legal name, date of birth, address, and unique identifying number (e.g., unexpired state identification card number, unexpired driver’s license number or an unexpired passport number) of each of its “beneficial owners” and “applicants”.

Additionally, the Final Rules require that reporting companies also provide a “scanned copy of the identification document from which the unique identifying number of the beneficial owner or company applicant is obtained.”

A “reporting company” is defined in the CTA as “a corporation, LLC, or other similar entity that is created by the filing of a document with the secretary of state or a similar office under the law of a state or Indian Tribe; or formed under the law of a foreign country and registered to do business in the U.S. by the filing of a document with such a filing office.” The CTA does not further define “other similar entity” and neither does FinCEN in its Final Rules. But FinCEN does emphasize that “the core consideration for the purposes of the CTA’s statutory text and the final rule is whether an ‘entity’ is ‘created’ by the filing of the document with the relevant authority.”

A “beneficial owner” is defined in the CTA as an “individual who, directly or indirectly, through any contract, arrangement, understanding, relationship, or otherwise, exercises substantial control over the entity, or owns or controls 25 percent or more of the ownership interests of the entity, or receives substantial economic benefits from the assets of the entity.” The definition excludes minors and certain others. The Final Rules define “substantial control”.

Exemptions to the Reporting Requirements

The CTA provides 23 exemptions to the reporting company definition, including any entity that: employs more than 20 full-time employees in the U.S., in the previous year filed federal income tax returns in the U.S. demonstrating more than $5 million in gross receipts or sales in the aggregate, and has an operating presence at a physical office within the U.S. The exemptions in the CTA also include many industries that are already heavily regulated, such as banks and insurance providers, as well as publicly traded companies subject to SEC reporting.

FinCEN has indicated that these Final Rules for beneficial ownership reporting represent the first of three sets of regulations that FinCEN is creating related to the CTA. FinCEN says for the second and third set, it will issue proposed rules with a public commentary period for both, as it did for the first set. The second set will be for implementing protocols for access to and disclosure of the beneficial ownership information, and the third set will address amendments to the Customer Due Diligence section of the Bank Secrecy Act. FinCEN has not indicated dates for when it will be issuing proposed rulemaking for the second and third set of proposed rules; but mentioned that it may issue the second set later this year.

The CTA includes substantial civil and criminal penalties for willful failure to report, willfully providing false or fraudulent information, and for unauthorized disclosure or use of the reporting information. Penalties for reporting violations can be as high as $10,000 or 2 years in prison, or both, and penalties for unauthorized disclosure or use violations can be up to $250,000 or 5 years in prison, or both (or higher if part of violating another law).

These are some, but not all, of the key details of the CTA and FinCEN’s Final Rules. As we await the January 1, 2024 effective date, business and legal professionals can begin preparing for the CTA’s beneficial ownership reporting requirements by carefully reviewing the CTA itself along with the Final Rules. And, if applicable, begin gathering reporting information.
We will further discuss the Final Rules and explore many of the CTA’s provisions in-depth during our upcoming one-hour webinar, Beneficial Ownership Disclosure Requirements Part 3: FinCEN’s Final Rules Implementing the New Corporate Transparency Act scheduled for November 1st, 2022 at 1 p.m. EST 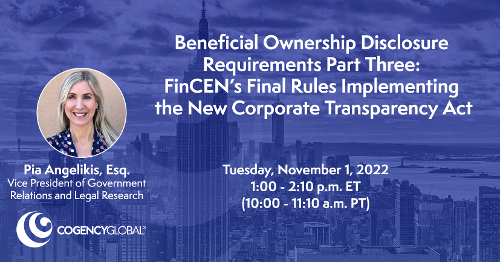