FOIA at 50: Fifty Fun Facts About the Freedom of Information Act (PART 1) 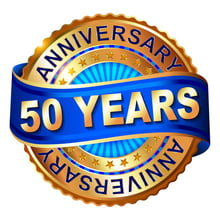 The U.S. Freedom of Information Act (the FOIA), a Federal law encouraging openness and transparency in government, was first signed into law on July 4, 1966, and took effect a year later on July 4, 1967.  Many observances of the 50th anniversary of the signing of the law occurred last summer, but the 50th anniversary of the law going into effect hasn’t actually occurred yet. The FOIA serves an important role in the way citizens understand the working of our government, and the law has had a fascinating and sometimes controversial history.  FOIA has changed significantly over the years, just as it has changed the way Americans see their government. During this interval between FOIA anniversaries, let’s take a look at the law and its impact on American history in fifty facts about the FOIA.

The Nine Exemptions to the FOIA[4]

The FOIA authorizes lawful withholding of information when agencies reasonably determine that release would harm an interest protected by the following exemptions:

The Three Exclusions from the FOIA[5]

There are also three exclusions that protect law enforcement and national security records:

In Part 2, we will discuss several more FOIA topics: the various types of FOIA requestors, turnaround times for requests, and the resolution of FOIA requests.  We will also explore FOIA backlog and agency responsiveness; look at some famous FOIA requests in its history; and explore FOI laws in the states and around the world.