Ireland: A Hub for the Aviation Industry 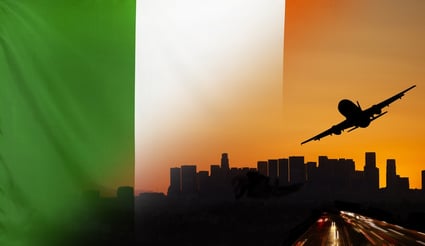 Eire, there and everywhere! If you’re flying over the Atlantic, Pacific or Indian Oceans, chances are that the plane you’re in has a connection to Ireland.

Ireland has emerged as a hub for the aviation industry in the last few decades. Over 50% of the leased airplanes operating in any part of the world have a connection to Ireland. Most of the global commercial aircraft leasing companies have a presence in Ireland (Dublin or Shannon). But how did Ireland become geographically and commercially important to the industry?

If you’re in the aviation industry, Guinness Peat Aviation or GPA is a name that you’ll instantly recognize. Dr. Tony Ryan (the Ryan Air and Aer Lingus Founder) established GPA in 1970s in Shannon, Ireland, and during the 1980’s, it became the leading European aircraft lessor. Although GPA had its downfall in the late 1990s, by then, Ireland had become a mature market for the aviation industry with many commercial lessors and aviation professionals calling Ireland home.

Why Are So Many Aircraft Lessors and Aviation Companies are Based in Ireland?

A number of economic considerations work in favour of Ireland as a popular destination for aircraft lessors and aviation companies. A few of them are:

In spite of the prevalence of Ireland as a world renowned aviation hub, parties to international aviation contracts related to the purchase or lease of an aircraft or engine generally choose New York or the U.K. as the jurisdiction governing these financing transactions. This is because of the reputations these jurisdictions have earned for having sophisticated and well-developed bodies of commercial and business law. Generally, the parties to these transactions appoint a process agent (a/k/a “contract agent”) when they do not have a presence in the jurisdiction of the governing law of the transaction. Frequently, the appointment of a process agent is required to close the deal. (For more information, see our past blog article, Choice of Law Considerations in Aviation Finance Transactions. )

Other Advantages of Ireland for Aviation Industry

Although there are enough economic reasons (as stated above) to do business in Ireland, it wouldn’t be as compelling if the political and social environment weren’t as favourable. The Irish government strongly backs the aviation industry and constantly takes measures to keep the climate friendly and viable by immediately addressing concerns to restore faith in its market. The absence of any licensing/regulatory regime for holding the aircraft and the availability of quality corporate service providers to manage the Special Purpose entities in Ireland are also distinct advantages that the country offers. Also, English being the predominant business language and availability of highly educated English-speaking professionals makes Ireland an attractive destination for the global aviation industry.

Not to mention the Irish luck. May the wind be always at your back!