The Challenge of Tracking Compliance Due Dates for Nonprofits 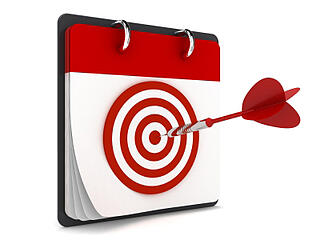 When it comes to compliance, nonprofits get an extra dose that is not always welcome or easily understood. For those that are well-versed in compliance for nonprofits, one of the difficult tasks is tracking due dates and understanding what triggers them.

Well, start loading your calendars and get ready to take aim at some moving targets as it’s not always an easy shot for nonprofits trying to comply with state charitable and corporate filing requirements.

Nonprofits that solicit charitable donations nationwide and/or conduct business in multiple states (i.e. have a Certificate of Authority or are qualified to transact business in a state) are required to file annual or periodic reports with multiple state offices.

On the corporate side, there is the need to file periodic or annual reports, usually with the Secretary of State or a state office that regulates business activities. Similarly, on the charitable side, nonprofits that are registered to solicit charitable donations in one or more of the 42 states that require registration, must file annual renewals and other filings with the state charities regulator, usually a division under the Office of the Attorney General, Secretary of State or Consumer Protection Office.

Unfortunately, when it comes to calculating state corporate and charitable compliance due dates, the states are far from uniform. Each state has different triggers or requirements that determine corporate and charitable compliance due dates. There are, however, a few broad themes. Most states calculate compliance due dates based on an organization’s calendar or fiscal year end, date of formation, qualification or registration, or on a uniform statutorily required due date for all organizations in the state. The examples below illustrate how due dates vary even within a single state.

For charities registered to solicit donations in California, a charitable solicitation registration renewal on Form RRF-1 (Annual Registration Renewal Fee Report) is due 4.5 months after a nonprofit’s fiscal year end.  Whereas, the California corporate annual report (Statement of Information) is due on the last day of the month that a foreign nonprofit was qualified to conduct business in California. (The use of the word “foreign” in this context means a nonprofit not incorporated in California.) For California domestic nonprofits, the filing is due biennially on the last day of the incorporation anniversary month. This is further complicated by the fact that an initial report is required 90 days after a nonprofit (domestic or foreign) incorporates or qualifies to transact business in California.

Sampling of Corporate Annual or Periodic Report Due Dates

In addition to calendar-based due dates, a few states that normally do not require a filing, might request one. For example, Texas can request a periodic report once every four years and Mississippi, where an annual filing is voluntary, may request a status report, which, if requested, is due by April 15th. Another example, is Pennsylvania, which normally requires a filing once every 10 years (the next one is due in 2021), unless the officers of a nonprofit change, in which case an annual report is due by April 30th of the year following the change.  Also, keep in mind that in most states (Maryland being a notable exception), filing extensions are not available for corporate annual or periodic reports.

Extensions: A Moving Target on the Compliance Calendar

As you can see, tracking the different due dates between states and even within a state for keeping your nonprofit in compliance with corporate and charitable requirements can be quite a challenge. And it gets even more tricky when extensions change those due dates. By developing a flexible tickler system that takes these factors into account or by working with a reputable service company, you can greatly improve the odds that you’ll hit the target.