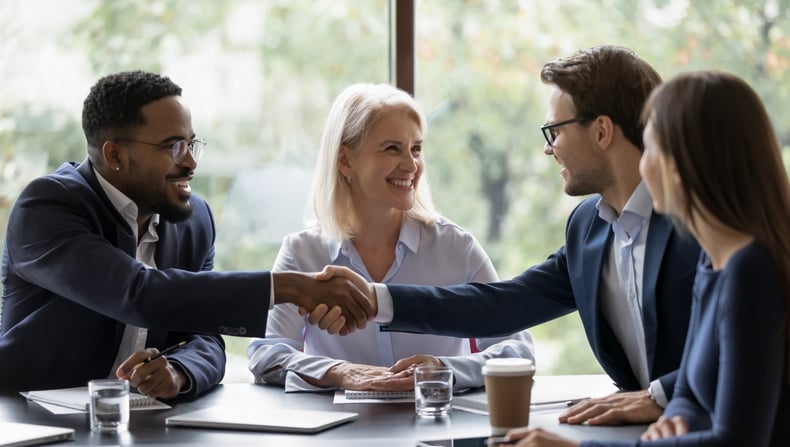 When my five-year-old daughter recently scraped her knee, I started to panic a little. I knew that the Dora, Disney and Hello Kitty bandages had lost their effectiveness ever since she found the fashion-forward pink and white bandages, emblazoned with pink ribbons, in my office. (As an avid collector of commercial co-venture items, my home office is decorated in pink promotions related to breast cancer awareness.) My daughter was very fond of those pink bandages and we were all out of them. To avoid a meltdown, I quickly searched online and, luckily, was able to find and order this limited edition item.

The organization that sells these pink bandages was developed to help make a difference in the lives of people affected by cancer. A portion of the proceeds from the sale of its products is donated to a variety of charities that help and support cancer fighters, their caregivers and the survivors.

This type of promotion is frequently referred to as “cause-related marketing” or a “charitable sales promotion” (CSP) and is statutorily defined in many states as follows:

Whereas a “commercial co-venturer” (CCV) is typically defined in this way:

"Commercial co‐venturer" means any person, including, but not limited to, any assignee, subcontractor, independent contractor or successor in interest, who, for profit or other consideration is regularly and primarily engaged in trade or commerce other than in connection with the raising of funds or any other thing of value for a charitable organization, and who advertises that the purchase or use of his goods, services, entertainment or any other thing of value will benefit a charitable organization or charitable purpose.[2] 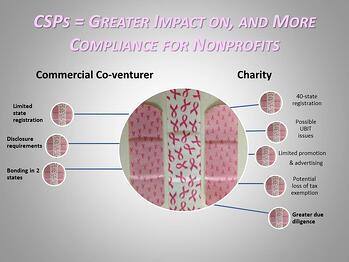 Based on these definitions, the organization that sells the special pink bandages would likely be considered a commercial co-venturer that conducted a charitable sales promotion and may, therefore, be subject to charity registration requirements if the promotion is conducted nationwide or in a state that requires registration.

Per the requirements of state charitable solicitation statutes, far fewer states[3] require some form of registration for the co-venturer. In four of these states (Alabama, California, Massachusetts and South Carolina) a commercial co-venturer registration statement is required. Two states also require a surety bond ($25,000 in Massachusetts and $10,000 in Alabama). Arkansas, Hawaii, Mississippi and New Hampshire require the filing of a Notice of Charitable Sales Promotion (NH), Written Consent Form (HI) or similar filing with the state.

In addition to initial state filings for commercial co-venturers, post-promotion reports detailing the results of the charitable sales promotion (merchandise and amount sold, gross income/sales, expenditures incurred, net amount to charity, etc.) must be filed in some states. For example, a Closing Statement for Commercial Co-venturers and a Joint Financial Report for a Solicitation Campaign are required in Alabama and South Carolina, respectively, within 90 days of the termination of the promotion. Similar reports within similar time periods are required in other states. Also, in some states that do not require a post-promotion filing, the statute requires the CCV to provide the state and/or the charity a financial accounting of the CSP upon demand. Similarly, many states require the charity and/or the CCV to retain all records pertaining to the CSP for three years.

Register now for our upcoming webinar, Charitable Sales Promotions: Legal, Financial and Regulatory Requirements for Commercial Co-ventures on May 24.

Contracts Necessary in Some States

Most states also require charities and commercial co-venturers to enter into written agreements, copies of which must be filed in 8 or 9 states,[4] and several others require a contract to be provided to the state upon demand. In the states that do require a contract, many of them have very specific language that must be included in the contract (e.g. goods or services to be offered, manner in which the charity’s name will be used, dates of solicitation/campaign, amount to be donated, geographic scope, maximum/minimum to be donated, provision for a final accounting, etc.).  Similarly, in some states where a contract is not required, a CSP must be conducted with the knowledge and approval of the charity, and written consent from a charity is required in some states for a CCV to conduct a CSP (e.g. Florida). Most of the above and remaining states that regulate CCVs require reporting of any commercial co-venture promotions in annual charitable registrations or renewals filed by the charity.

Unlike the many exemptions afforded to certain types of charities from charitable solicitation registration (e.g. religious organizations, educational institutions, hospitals, etc.), there are very limited exemptions applicable to CCVs.  The state of Washington statutorily exempts CCVs from filing, in 2013 Maine suspended most of the registration and reporting requirements for CCVs and there are other narrow exemptions that vary by state (e.g. a charity exempt from charitable registration in Massachusetts is also exempt from filing Form 10B – Addendum to Registration Statement to be Filed by Commercial Co-venturers).

Part 2 of this article will discuss required disclosures for charitable sales promotions. It will also address concerns related to the possible loss of tax exempt status that can result from these promotions as well as “best practices” that can help charities and CCVs avoid problems.

This article is provided for informational purposes only and should not be considered, or relied upon, as legal advice