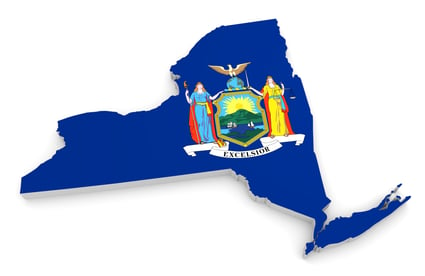 In 2013, amendments to Article 9 of the Uniform Commercial Code became effective and states began requiring new national UCC forms to align with the new requirements. Today, nearly all U.S. states use the standard national UCC forms dated 04/20/2011. New York remains the only exception.

Expectations were that New York would come on board soon after the other states enacted the Article 9 amendments and form updates. However, seven years later, New York only accepts the 2002 versions of the UCC forms.

We’ve highlighted a few key differences to take note of when filing UCCs in New York.

Filers more familiar with the 2011 version of UCC forms will find a few extra fields on the 2002 forms still in use by New York. In the debtor name section, pertaining to information about entity debtors, you’ll see the following:

In order to file a UCC1 or UCC3 debtor addition for an entity in New York, the ‘Type of Organization’ and ‘Jurisdiction of Organization’ of the debtor(s) must be completed. Failure to complete these two fields will result in rejection of the filing. (Note that for individual debtors, these fields may be left blank.)

If you do not file often in New York, it is important to keep these two fields in mind since New York is the only state that requires this information.

Unlike the current 2011 UCC forms, which now use labels like ‘Individual’s Surname’, ‘First Personal Name’ and ‘Additional Name(s)/Initial(s)’ for individual debtor information, the 2002 forms used by New York still use ‘First Name’, ‘Middle Name’ and ‘Last Name’. As is necessary in most states that use the 2011 versions of UCC forms, you’ll still need to consult an individual’s unexpired state issued driver’s license or state issued ID card for this information. If you’re unsure about the correct last name, first name, or middle name/initial, you can add a different version of the debtor’s name in the Additional Debtor name field on the UCC1 form and you can add more variations of the name on the UCC1 addendum form.

If you are using 2002 version forms for New York for the first time, take note that Public Finance Transaction, Manufactured Home Transaction and Transmitting Utility designations are located on the Addendum form rather than on the standard UCC1 form used by all other states. Conversely, the checkbox indicating whether the financing statement should be filed in real estate records is located on the UCC1 form for New York, but on the addendum form for all other states.

Trust and decedent designations are found on the addendum for New York but the language is different from what is used on the 2011 UCC1 form. The language on the New York form is as follows:

Debtor is a __ Trust or ___Trustee acting with respect to property held in trust.

This is an important point for filing in New York.

While New York amended Article 9, the state did not adopt the new forms that include the required statutory language about collateral being held in a trust. UCC filers need to consider including additional language on their New York financing statements to address this difference in trust language.

The field for indicating that the financing statement should be filed in real estate records is found on New York’s UCC3 form, not the addendum.

Remember that the filing of this form has no legal effect on the financing statement. It is up to the searcher to investigate the validity of the claim.

When Will New York Adopt the Latest UCC Forms in Use by Every Other State?

This is a question we had hoped would have been answered by now.

After amendments to Article 9 began to take effect in many states in July 2013, the 2011 national UCC forms were adopted within the same year or following year by every state except New York. It’s been six years since New York enacted the amendments to Article 9 and unfortunately, there’s still no indication that the state will move away from the older 2002 forms.